What is Metabolic Typing?

Metabolic Typing is a scientific approach to your health that carefully looks at your unique digestive system and recommends the specific foods and supplements that support your unique body structure. It can help you stabilize your weight at optimum levels, and improve your overall health and energy.

There is no “One Size Fits All” Diet. Eating food that aligns with your metabolic type improves your energy, your mental capacities, and boosts your emotional well-being. Every meal should leave you feeling satisfied. If you are already feeling good, eating should, at the very least, help to maintain your energy level.

But if you feel worse in some way, an hour or so after eating, such as:

Then the food you ate, worked against your Metabolic Type and made you either too acidic or too alkaline. When you discover your Metabolic Type, a whole new world opens up to you as you begin to become aware of the effects different food has on your body, mind and emotions.

The term biochemical individuality was coined by the biochemist Dr. Roger Williams. George Watson’s book Nutrition and Your Mind: The Psychochemical Response, developed a protocol for assessing the health of individuals suffering from ‘mental imbalances’, based on the acidity or alkalinity of their venous blood. William L. Wolcott in 1983 showed that either the Oxidative or Autonomic control system determined a person’s response to acid or alkaline foods. Francis M. Pottenger, M.D. in the 1930s and 1940s developed the relationship of nutrition to the sympathetic and parasympathetic divisions of the autonomic nervous system which are delineated in his book, Symposium of Visceral Disease and Vincent who developed the BTA machine, Royal Lee who started Standard Process, and Dr. Donald Kelly, D.D.S. Together these gentlemen developed Metabolic Typing.

The main idea is they say, half (others say 1/3) of the population derive their energy oxidatively (i.e. by converting nutrients into energy via the Krebs cycle), and that the other half derive it autonomically (via the neuro-hormonal system, under the control of the autonomic nervous system) and that either the Oxidative system or the Autonomic system is more active, or dominant, in any given individual.

Original researchers who developed metabolic typing, used the pH of venous blood to determine the sub-type within the dominant metabolic system of the patient. Individuals who operate primarily under the influence of the Oxidative system would be typed as Fast Oxidizers if they had acid blood, or Slow Oxidizers if the had alkaline blood. If, however, they primarily operated under the influence of the Autonomic system, they would be typed as Sympathetics if they had acid blood, or Parasympathetics if the had (relatively) alkaline blood.

Instead of using blood pH developed Harold Kristal, DDS in his book The Nutrition Solution, A Guide to Your Metabolic Typing developed a much simpler test which he termed a modified glucose tolerance test. Youdrink 40 grams of glucose and 5 grams of cream of tartar (which is 1 gram of potassium) test that showed the effects of Group I (vegetarian/carbohydrate) and Group II (protein and fat) foods on Oxidative and Autonomic types as below.

CO2 is a catalyst that allows oxygen to be released from the hemoglobin, freeing it up so that it can be absorbed into the tissue cells. Actually the tissues require three times as much CO2 as they do oxygen. If there isn’t sufficient CO2 the oxygen remains bound to the hemoglobin. Oxygen is alkaline forming in the blood while CO2 is acid forming.

This drink is acid forming to the two Oxidative dominant types, thereby increasing their blood levels of CO2 and decreasing their levels of oxygen. This has the effect of increasing the respiration rate, blood pressure and pulse as the body tries to compensate by breathing in more oxygen, while decreasing the ability to hold the breath, due to deficient oxygen. Also their saliva will become more acid, and their urine more alkaline. Their venous blood pH will be acidified by the drink.

Conversely, the glucose challenge drink is alkalizing to the Autonomic types, thereby increasing blood levels of oxygen and decreasing their levels of CO2. Accordingly their respiration rate, blood pressure and pulse will tend to drop, due to the presence of adequate amount of oxygen while their ability to hold their breath will increase. Their saliva will become more alkaline, and their urine more acid. Their venous blood pH will alkalized by the drink. From this one can determine which type a patient is. 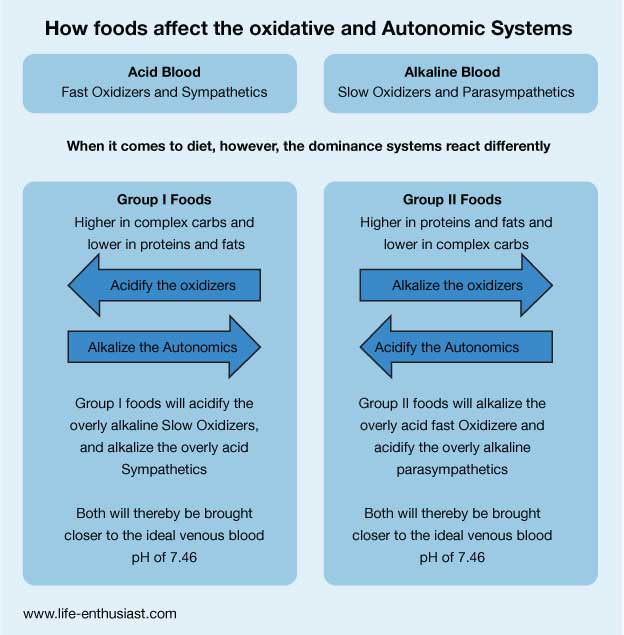 No products in the cart.

Quantity should be at least 1.

The item will not be added to cart.